Kataklizmic Design, with media arts and concert photography laid at the foundation, sprouted from Katherine's lifetime of passion for the arts — particularly an insatiable love of music, which she says "is my lifeblood". Her mission is for the business, apart from being an artist for a living, is to be the go-to studio for all types of artists' needs with media, design, branding, promotional, & press.

"Kataklizmic Design embraces working with artists ready to take things to the next level. I want to be a catalyst (or katalyst, haha) for artists, musicians, brands, businesses and entrepreneurs. This enables me to be surrounded with everything that I love, and to collaborate with like-minded people that share a passion and dedication to their ambitions and crafts. It is deeply rewarding to help them to reach their goals!"

2005: She registered Kataklizmic Design as a tradename in Arizona.

Before college, Katherine studied and trained in singing (1st soprano), piano, alto saxophone (1st chair), ballet (up to level 5), drawing, photography, website design, graphic arts, and animation. After college: ballroom & social dancing, pole dancing, aerial silks, lyra hoop, drawing, PHP, MySql, beginner Japanese language, and portrait photography. She has also dabbled in belly dance, hula dance, hula hoop, acroyoga, and violin. She served as keyboardist and backup vocalist for a couple of local bands, including Kitsune Robot. She has practiced as lead vocalist, and is planning to train more with Christina Aguilera's MasterClass. Further information about Kat's performing arts is on the lower portion of this page. Click here to jump there.

Employment & The Transition Away

Katherine accepted a role as Website Designer in May 2007 with GoDaddy.com, LLC. In May 2013, she resigned from this position and began operating Kataklizmic Design full time. During the 6 years spent in this role at GoDaddy, Katherine constructed thousands of websites for small businesses.

Katherine held a position professional portrait photographer for Lifetouch during Fall 2013. She was employed as a Front-End Web Developer for Prizelogic, a company that creates digital promotions for Fortune 100 Brands, for 2 and 1/2 years - from summer 2014 to November 2016. She resigned in November 2016 to once again operate Kataklizmic Design full-time.

She launched the online publication Burning Hot Events in April 2016. After recruiting and organizing Team Kataklizmic over the course of 2016, she officially launched her full service media packages for musicians - Band Identity℠.

She worked as a Front-End Web Developer for Yodle/Web.com on a 5-month contract starting in June 2017 and ending on the last day of October 2017.

In late 2018, Katherine began a part-time remote software testing job that she still performs to this day.

In 2019, Katherine moved to the Seattle area and continued to do freelance production work on the side, including: Camera Assistant for a Boeing Ad Campaign & a Seattle University ad campaign, and Production Assistant for an episode of TLC's "Long Lost Family", a couple of episodes of HGTV's "Island Life", an episode of "The Players' Tribune", WME's "Together Live" live event, Jimmy O. Yang Comedy Special live taping, a National Gay Pilots Assosciation promo video, a Jetoptera corporate video, and a Special Olympics Washington raffle ad.

Katherine has participated and been awarded in art & photography shows, contests, and expos (as a vendor and speaker). She has had her photography and videography published by local, national, and international music artists. She has attended and photographed an eclectic mix of hundreds of concerts. In 2014, Katherine was nominated by judges with the Phoenix New Times for "Best Concert Photographer in Phoenix".

"I have had the honor of working with Katherine Vega on multiple occasions and have never been disappointed. Whether doing photos, video, or the performing arts, she fully dedicates herself with relentless enthusiasm. Her photos are in a league of their own--I rarely see such fantastic work of musicians and stage acts! I highly recommend Katherine and can't wait to work with her again."
- Cira Corellia (Musician, Gamer, Twitch Streamer, Model, Actress, & Costumer)

Don't hesitate to contact Katherine to schedule a creative consultation, or book a shoot! You will receive an honest evaluation and a fair estimate based on the scope of the work.

Katherine's a seasoned professional that is easy to work with, passionate , committed to quality, and very versatile due to a wide range of experience. Contact Here

Started training and conditioning for pole and aerial at professional performance level with Nyla Farraz privately, and in groups, at Violet Flame Studio (Scottsdale, AZ) in Spring 2016. Intend to train further in the future. 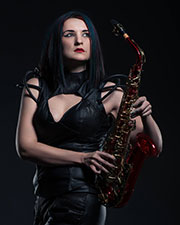 "The burlesque show was fun, exciting, and beautiful. Thank you For delighting us with your energy and Performance."
~ Kristy Metzger